Trillium and a group of investors representing over $3.4 trillion in assets sent a second letter to Starbucks on March 15, 2022, urging the company to publicly commit to respect workers’ rights to organize into a union and to swiftly negotiate fair and timely collective bargains with workers should they vote to unionize. 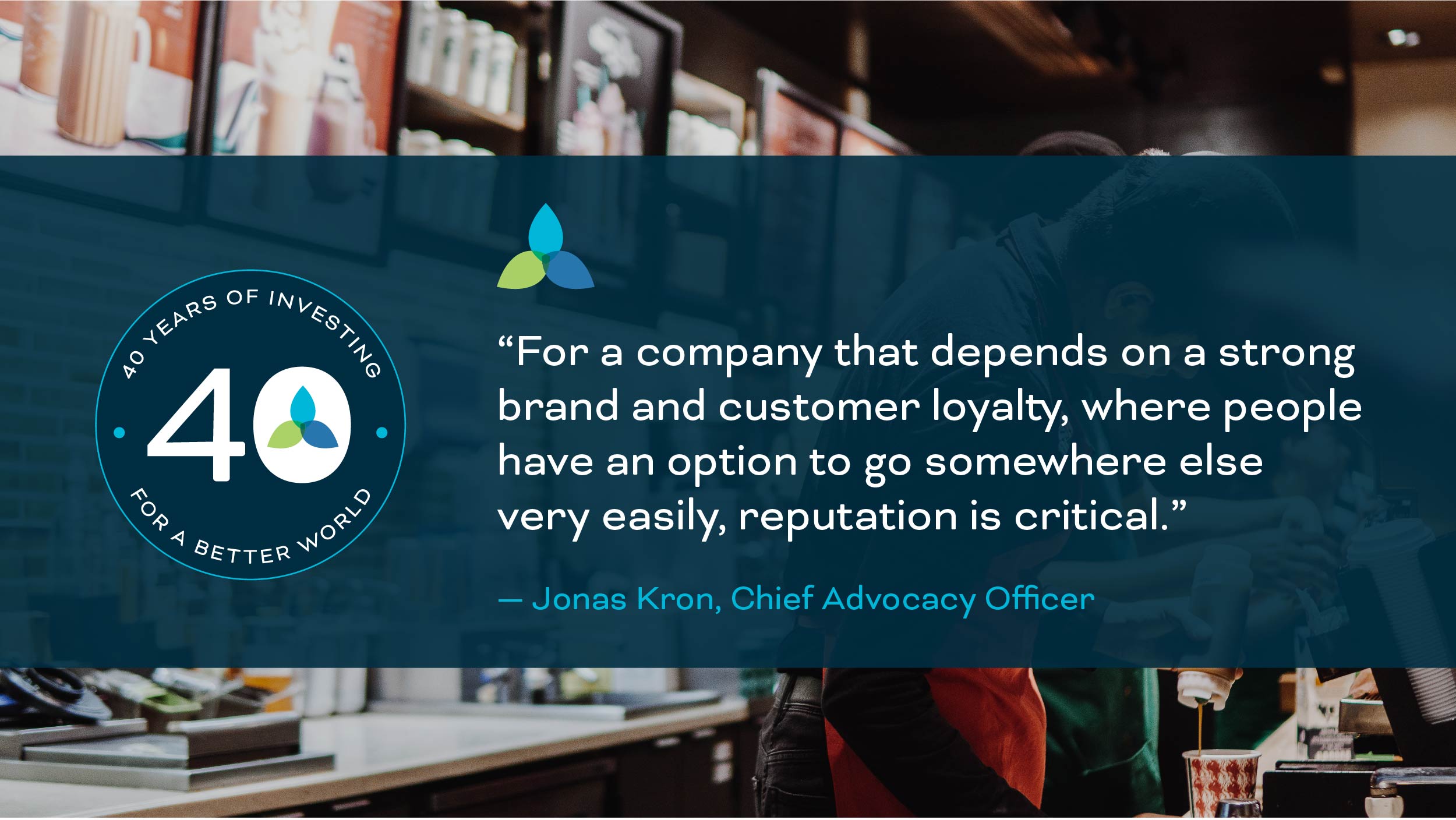 Trillium and a group of investors representing over $3.4 trillion in assets sent a second letter to Starbucks on March 15, 2022, urging the company to publicly commit to respect workers’ rights to organize into a union and to swiftly negotiate fair and timely collective bargains with workers should they vote to unionize.

On March 15, 2022 Trillium, SOC Investment Group, NYC Comptroller Brad Lander, PIRC, and Parnassus Investments led a group of investors representing over $3.4 trillion in assets in sending a letter to Starbucks asking the company to publicly commit to respect workers’ rights to organize into a union and to swiftly negotiate fair and timely collective bargains with workers should they vote to unionize.

This letter, the second on this topic we have sent in the last three months, was sent out of concerns that arose since two cafés in Buffalo, NY voted to unionize in December. According to the National Labor Relations Board, during the following months Starbucks violated federal labor law by responding to employees’ protected labor activities, including engaging in surveillance and threats, enforcing previously unenforced rules, closing a store earlier than scheduled, warning and suspending a leading union supporter, and causing the discharge of another.[1]

These and other alleged actions are of concern to Trillium and the co-signers of the letter. First, not only is there an apparent violation of federal law, but it would appear that Starbucks is not acting in accordance with its commitments to the United Nations (UN) Guiding Principles on Business and Human Rights; UN Global Compact; Organization for Economic Cooperation and Development Guidelines for Multinational Enterprises; and International Labor Organization Core Labor Standards.

Beyond that, Starbucks has worked hard to create a positive brand reputation rooted in pro-partner sentiment.[2] In its reporting, Starbucks describes how its response to

organizing efforts could negatively impact how the brand is perceived. With rapidly growing public support for unions, which currently stands at a high of 68% approval, we believe that Starbucks’ reputation may be jeopardized due to reporting of aggressive union-busting tactics.[3] Consumer sentiment is changing, too. In a recent poll, 42% of Americans say they are less likely to shop with a company that is trying to stop employees from unionizing.[4]

Later that day, the chair of the Starbuck’s board, Mellody Hobson, was asked about the letter and the concerns expressed in it on a CNBC interview. In response, Ms. Hobson said “We made some mistakes here. We didn’t listen, and we need to do that. We are bargaining with the, negotiating with the union right now. We want a constructive relationship.” And she had a similar response to a question we posed to her at the company’s annual meeting the next day.

While these were not the responses we were looking for, they did indicate a change in tone that we hope presages a deeper and more substantive pivot for the company. With more than 150 cafes now seeking votes, it is abundantly clear that Starbucks cannot proceed as it has. It must make changes.

This group of investors―which began in December as $1.3 trillion in assets and quickly grew to $3.4 trillion―will continue to speak up on the importance of respecting worker rights. We plan on further conversations with senior leadership at Starbucks and to be a leader on this vitally important social topic.

Morningstar Magazine: Dozens of major shareholders push Starbucks on its handling of union activity as company faces labor board complain